Society of the Sacred Advent (SSA)

The Society of the Sacred Advent is an Anglican religious order founded at Brisbane, Queensland, Australia, in 1892 by Caroline Amy Balguy (1833-1915), and still active in that city.

Known as Sister Caroline Amy and, later, Mother Caroline, Caroline Amy Balguy started her religious life at the Community of St John Baptist in Clewer, England. She came to Australia on 9 December 1892 at the request of the Reverend Montagu John Stone-Wigg, Vicar and Canon Residentiary of St John’s Pro-Cathedral, who saw the need for an Anglican religious order for women in Brisbane. In its early days the Society of the Sacred Advent focused on ministering to the needs of women and children, establishing several schools and children’s homes throughout Queensland. In 1895 the Sisters opened a boarding school for girls in Nundah, at the site of a former boys' school, known as Eton High School. On 8 July 1910, under the guidance of Mother Emma, the Sisters moved to Albion.

The Society of the Sacred Advent exists "for the glory of God and for the service of His Church in preparation for the Second Coming of our Lord and Saviour Jesus Christ". To this end, the Sisters devote themselves to God in community under vows of poverty, chastity and obedience, leading a life of prayer, silence and work. The Sisters' aim is "to point the way to Jesus in our own time, to a world which has largely lost touch with spiritual realities and is caught up in despair, loneliness and fear". The patron saint of the order is St John the Baptist. 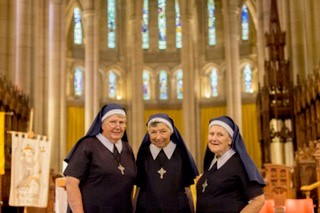